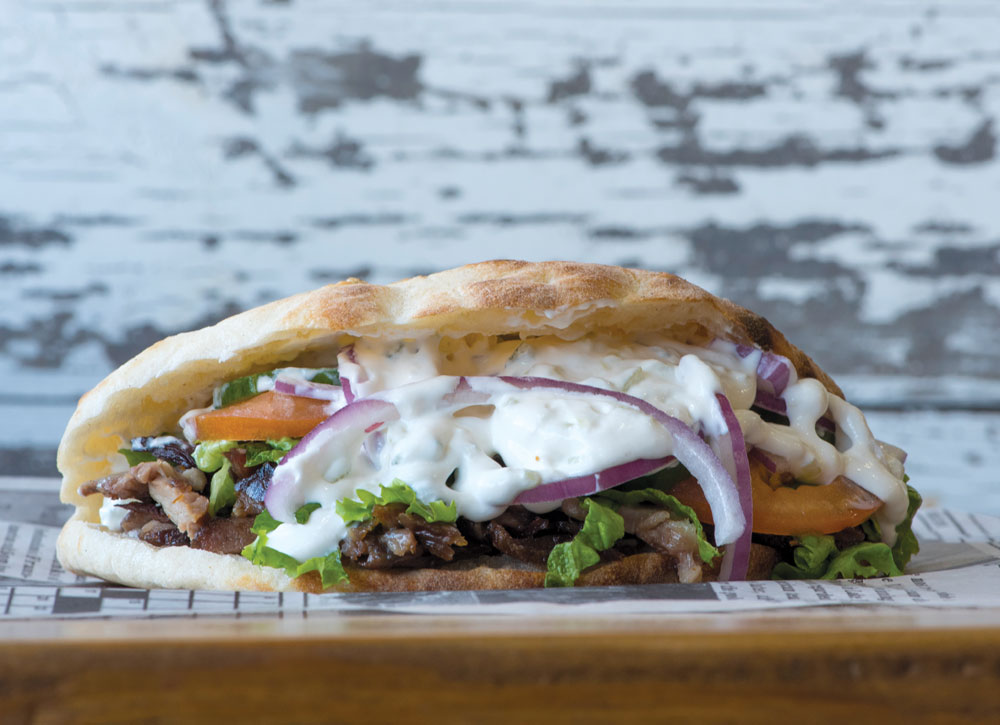 the doner kebab at j's pitaria photo by david kovaluk

J’s Pitaria in the Bevo Mill neighborhood is one of a handful of Bosnian restaurants that emerged on the scene last year. St. Louis is home to a large Bosnian population, and many of us are long overdue on getting hip to the country’s culinary delights, which offer an enticing combination of West and East. J’s is delightfully decorated with a light, bright touch. The food magically balances fast-food speediness (and price!) with fresh, homemade flavor, making it an ideal lunch spot.

PITAS
You notice them the moment you step inside. A warm glow emanates from a case of golden-brown pitas, lined up like delicious little soldiers. Made fresh throughout the day, the pitas are made with hand-stretched and rolled phyllo dough. They’re conveniently priced by the pound, so I tried them all. The cheese pita was my favorite – crisp, warm layers of phyllo encased oozing kajmak, a butter-cheese similar to clotted cream with a hint of Boursin-like tang. It sounds heavy or greasy, but is actually rather delicate. The spinach and cheese pita is also noteworthy, like a lighter version of spanakopita, while the beef version is a little more substantial. If you save room for dessert, get the Nutella pita.

DONER KEBAB
Either come hungry or bring a friend, because J’s doner kebab sandwich is massive and immensely satisfying. The house-prepared doner is savory and juicy, a nice counterbalance to the sandwich’s crisp lettuce tomato, cucumber, red onion and creamy tzatziki sauce. Bread can make or break a sandwich, and here, it’s ace: Instead of your typical bland, dry pita, J’s uses lightly toasted homemade somun, a Bosnian flatbread. The kebab is also available in salad form, which makes a nice lighter lunch.

CHICKEN PANINI
A chicken panini might seem prosaic at a restaurant like J’s, where so much effort has gone into crafting an authentic Bosnian menu. But the addition of kajmak and somun make this sandwich something else altogether. The creamy spread infuses every bite, but isn’t used so lavishly that the panini becomes a mess.

USTIPCI
Offered as a side, this could be your whole meal. Ustipci are essentially Bosnian doughnuts; they come out piping hot, soft and yeasty. Your choice of kajmak or ajvar, a smoky dip made of fire-roasted red peppers and eggplant, accompanies each order. I especially liked the ajvar – its smoky tang cut through the ustipci’s richness. For a sweeter option, you can also get your ustipci with Nutella.

The Downside
Small menus aren’t a bad thing – they signal a focused restaurant dedicated to what they do best. That said, although the two sandwiches can be ordered as a salad, it would be nice to have one or two lighter salads or sides (sans meat or cheese) to choose from.