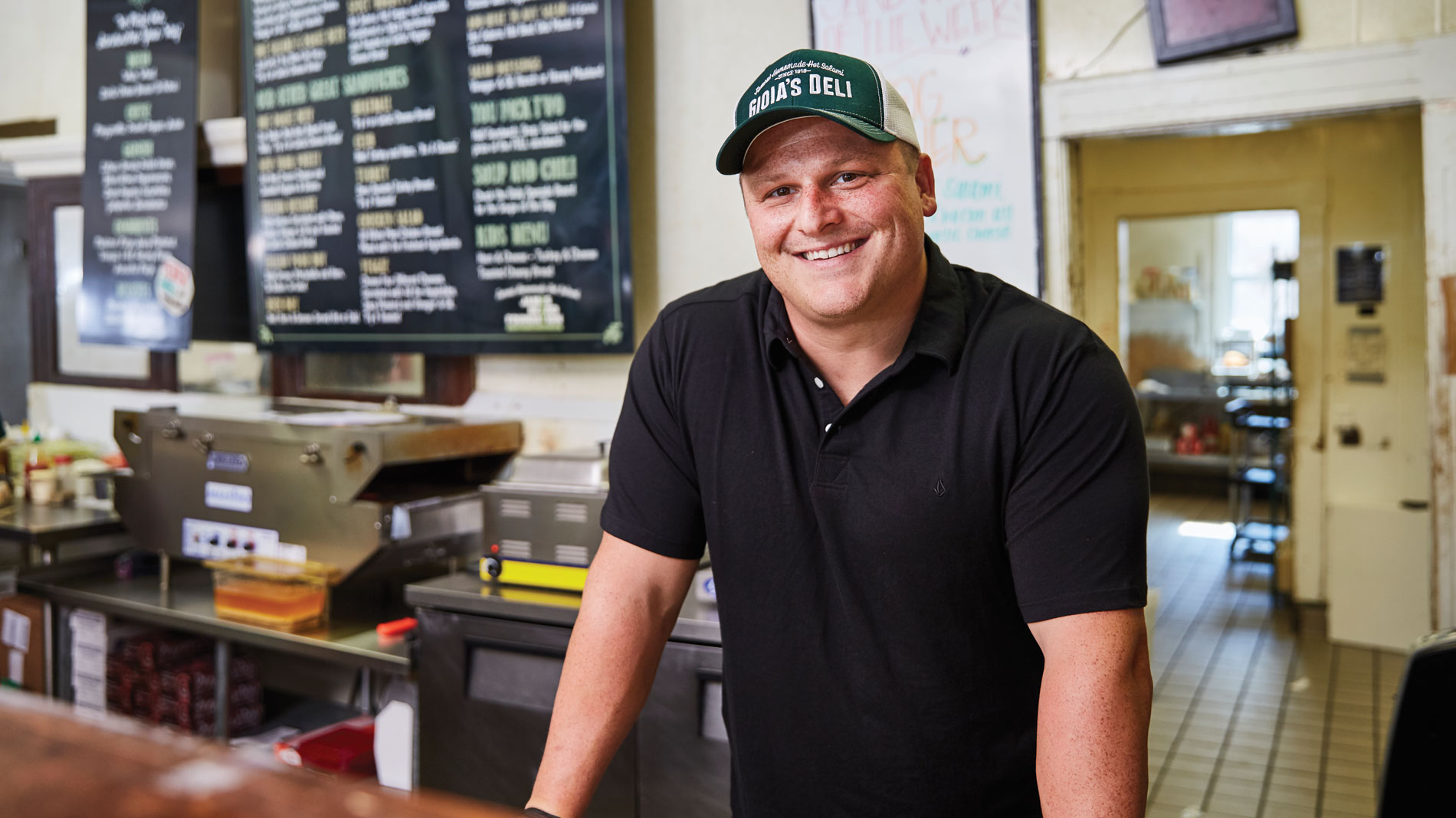 When Alex Donley graduated from high school, his girlfriend’s parents wanted to take them out to Cunetto House of Pasta to celebrate. When the wait was exorbitant, Donley had a better idea. He conspiratorially told the group to follow him out of the restaurant, and led them up Macklind Avenue to Gian-Tony’s Ristorante.

“We went through the kitchen at Gian-Tony’s, and I was like, ‘Tony, can you get us a four-top?’” he said. “I felt like such a big shot. And of course it was the greatest meal ever because Tony made it for us, and he knew I was trying to impress my high school sweetheart. We sat down, and they had appetizers for us we didn’t even order.”

That girlfriend’s name is now Amanda Donley – she’s his wife and business partner.

Alex Donley is connected. The 32-year-old, rosy-cheeked Irish co-owner of Gioia’s Deli was adopted by The Hill at a young age. He grew up in his family’s restaurant across the street from Gian-Tony’s and has known chef-owner Tony Catarinicchia his whole life. “He looks like Mario from the Mario Bros.,” Donley said. “He’s 68 years old and still in the kitchen every day. He still debones the veal himself – does all that.” These days, Alex and Amanda bring their three kids (the fourth is on the way) to Gian-Tony’s every Christmas Eve.

Donley’s mom and co-owner, Cathy Donley, took over Gioia’s in 1980. “Everyone owes my mom a favor,” Donley said. She was smart enough to focus on what set the little Italian grocery on the corner of Daggett and Macklind avenues apart – house-made hot salami sandwiches – and turned the place into a deli.

Almost 40 years later, the Donleys are still making original owner Challie Gioia’s hot salami recipe. St. Louisans line up for lunch where Hill residents shopped for groceries 100 years ago. Order the Spicy Daggett sandwich, Donley said, and everything you’re eating is made within two blocks – the hot salami and giardiniera at Gioia’s, the coppa and capicolla at Volpi Foods and the bread at Fazio’s Bakery. In 2017, the deli received a James Beard America’s Classics award, reserved for family-owned restaurants at least 10 years old that reflect the character of their communities.

When he bought into Gioia’s with his mom, Donley still had a lot to learn about the family business – not how things were done on The Hill, but why. “I was very cocksure,” he said. “I was like, ‘Mom, we’re gonna price stuff out, I’m going to get you the lowest price on everything, and I’m gonna make my salary within the first month.’

“And I did,” Donley said. “But I went with the big guys. Within six months, the prices were back up, and I ruined relationships. My mom was like, ‘Are you ready to go back to the people we can trust?’ She was very good about making sure I made my own mistakes.”

Now Donley has a rule: “If I don’t have the business owner’s personal cellphone number, then I won’t do business with them,” he said. “If my bread gets messed up, I can call Chuck Fazio and yell at him. Every vendor I have is a personal friend, and they will pick up my call. Can’t call Sysco.”

Rather than stifling Donley’s ambition – a drive fueled by boundless enthusiasm that invites others in instead of taking them down – the rules of The Hill have shaped Gioia’s growth.

In 2014, Donley launched a food truck. He made sure to talk to Zia’s on the Hill owner Dennis Chiodini first, since he had experience with a truck. “He really helped me get the lay of the land – helped me with build out and everything,” Donley said. As vendors or as peers, The Hill supports The Hill.

In 2016, Donley opened a second location of the deli downtown. Earlier in 2018, he opened a third in Creve Coeur. “It makes it harder now that we’re growing so much,” he said. Gioia’s supports a lot of business in St. Louis, but could they open in Kansas City or Chicago? Donley seemed interested but wary. “I’d have to change my values a little bit, and I don’t want to do that,” he said. “I’ve been offered, and I say no to everybody. I should have said no to Busch Stadium. … That was a very expensive lesson.”

Bringing up a failed business venture, he’s still cheerfully energetic. “Literally, I could stare at home plate while selling sandwiches,” he said, leaning in. “Only the Cardinals could make me break that rule.” Donley pulled the new, potentially incredibly lucrative, Busch Stadium location after one (opening) day of business. He said the stadium didn’t care enough about service. “Here, it’s everything. I’ll give you the store if you’re unhappy. … Now I know. It’s my product, my brand. I’m in charge of it and no one else.”

It was again The Hill community that saw Donley through this, probably the biggest disappointment of his professional life. First, John and Frank DiGregorio of DiGregorio’s Italian Market helped him produce the extra hot salami he needed for the venture. The DiGregorios make salsiccia sausage (the best in St. Louis, according to Donley), so they knew what they were doing.

“And it was not even a question of money,” Donley said. “It was just, ‘Let us help you get where you need to be.’” When he broke the deal with the stadium and had no idea what to do with the surplus, the DiGregorios offered to keep it frozen for him to use as needed. “Nobody else would ever do that. They’d be like, ‘Where’s my money?’”

To Donley, the DiGregorios represent what makes The Hill The Hill. They live, work, raise their families and spend their money there. John and Frank live next door to each other. They took over the shop from their mother, Dora DiGregorio (she’s the one always sitting behind the counter when you walk in), and their sons all work in the business. When Marconi Bakery was going to close, John bought it and kept on the original owner to bake the bread. He buys properties in the neighborhood simply to ensure they’re well maintained.

Monsignor Vince Bommarito, the priest at St. Ambrose Catholic Church, does the same thing, according to Donley. He knows everyone and will help people looking to sell their homes connect with buyers. “He’s literally the boss of The Hill,” Donley said. “It sounds Mafioso, but he’s a super positive force.”

Milo’s Bocce Garden owner Joe Vollmer is a similar story. “He’s our alderman, and every morning he walks the whole Hill,” Donley said. “It’s like, come on – that is why The Hill is so great! Our alderman is walking the streets every morning and listening to everybody.” Vollmer also works the bar at Milo’s. “So if you have a problem, you can go to the bar and yell at him,” Donley said.

“This community is important to us. We are going to make sure to preserve it by buying up property that’s just sitting there vacant and either improving it and trying to get good people in it, or just sitting on it and taking a loss because we don’t want it to become an eyesore and make all the other property values go down.”

While you can’t help wondering what this kind of entrenched investment does for those outside the community – how does someone new move into the neighborhood or get in on the established group’s support? – Donley’s love for and obvious trust in The Hill are contagious. He’s incorrigibly open, an unreserved talker who doesn’t seem to bullshit even as he vigorously promotes the neighborhood.

Like any good honorary Italian, if you ask Donley about his favorite places to eat (he loves Anthonino’s pasta and that they accommodate his rambunctious children), he’ll start talking about the owners’ families. Ask him about people on The Hill, and he’ll start talking food.

“Do you ever notice that restaurants get to a point where the owner’s not in the kitchen anymore?” he asked. “At The Hill, they’re still in the kitchen cooking.” He launched into a litany of names: Anthony Scarato at Anthonino’s, Larry Fuse Jr. at Lorenzo’s, Tony Catarinicchia at Gian-Tony’s, Adriana Fazio at Adriana’s, Dominic Consolino at Amighetti’s, Miguel Carretero at Guido’s, Mark Favazza at Favazza’s. “What Mark’s doing is serving 600 to 700 people a day, and it’s him!” Donley said. “He can’t work the room because he’s on the range.”

Donley partially attributes the commitment of these chef-owners to the fact that they all own their buildings. “When the sidewalk’s cracked, you don’t call your landlord, you fix it,” he said. It’s what makes The Hill restaurant culture different than other food neighborhoods in St. Louis. Beyond that, like the DiGregorios, Hill restaurateurs have bought into more than their own businesses. Donley bragged on how often these chefs eat at each other’s restaurants. They’re invested in each other.

Walking on The Hill with Donley is exactly what you might expect. His smile never takes a break, and you can’t go a block without running into someone he knows – you’ll get caught chatting about St. Ambrose School, recent health problems, the crappy weather or the insufficient pickles on a recent sandwich order at Gioia’s.

Volpi owner Armando Pasetti warned Donley before he bought a house there. “If you live on The Hill, you are always at work.” And he admits it did feel a little too close – everyone in other people’s business – when he was younger. Particularly the time he lit a fire in the alley behind Lilly Avenue as a kid. “I ran away back to the deli and I was like, ‘No one will know.’ My mom knew before I got back – and Lilly is one block over! She screamed at me in front of all the customers. I was so embarrassed.”

Now that his alley fire days are over, Donley doesn’t feel that way. Especially because Alex and Amanda have kids, they don’t find the immersion claustrophobic at all. “This is so special,” he said. “Me and Amanda travel a lot, and there’s nothing like this. I love coming back to this.”

They can walk home from Gian-Tony’s after Christmas Eve dinner and to St. Ambrose for Mass. They walk to Gelato Di Riso with their kids at least once a week – and owner Larry Fuse Jr.’s daughters are their babysitters. The Hill is where they want their kids to grow up. 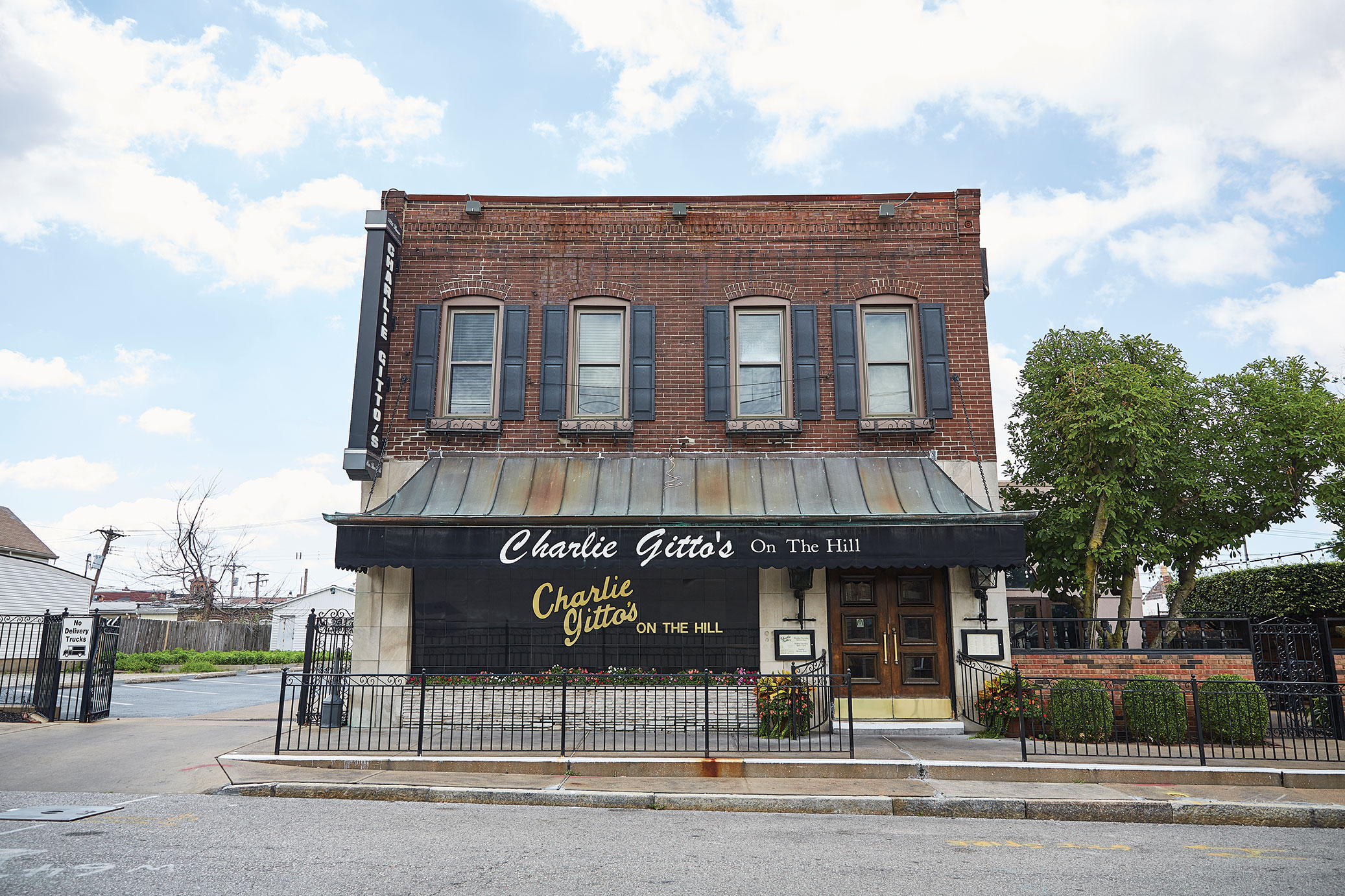 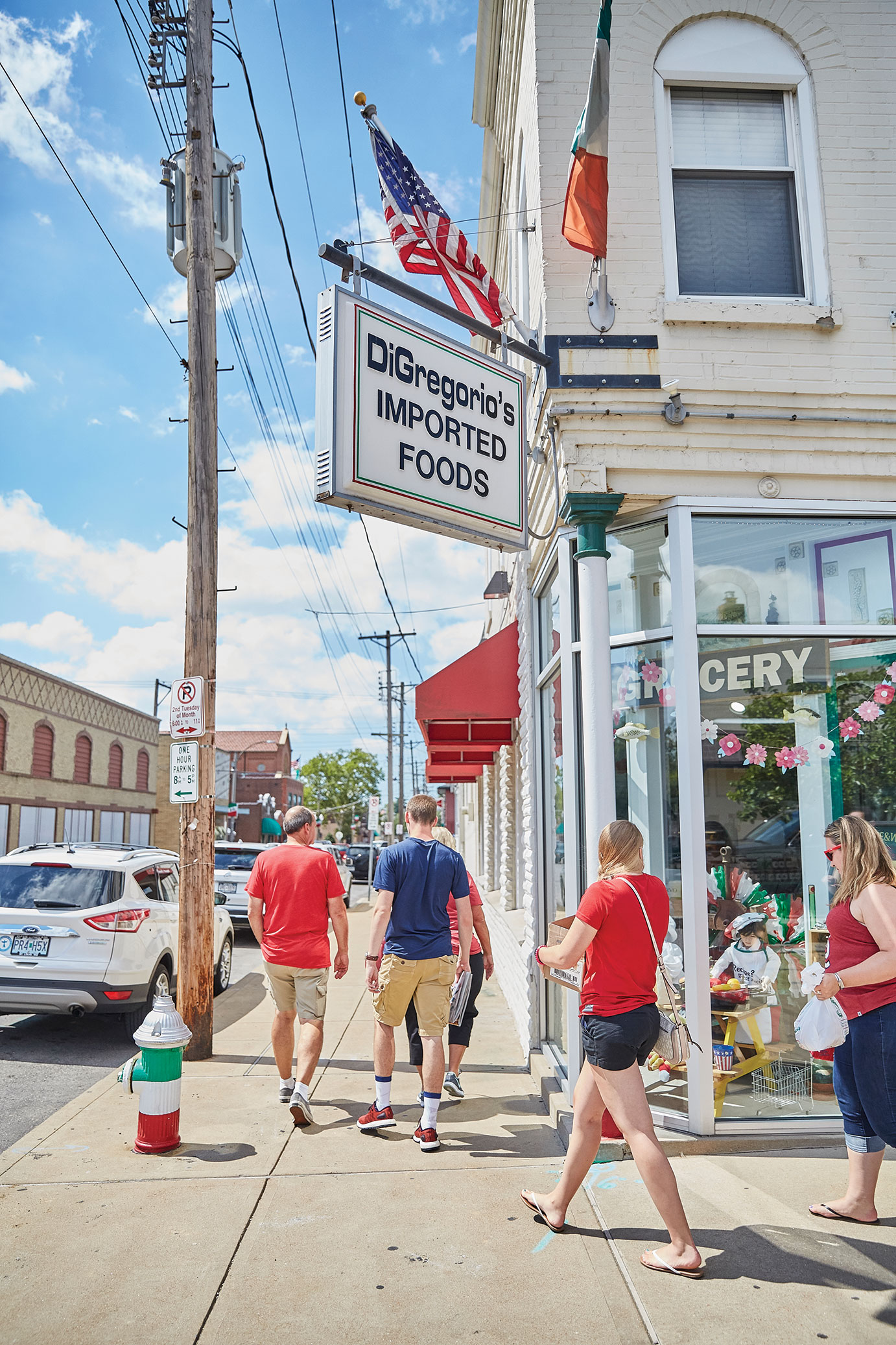 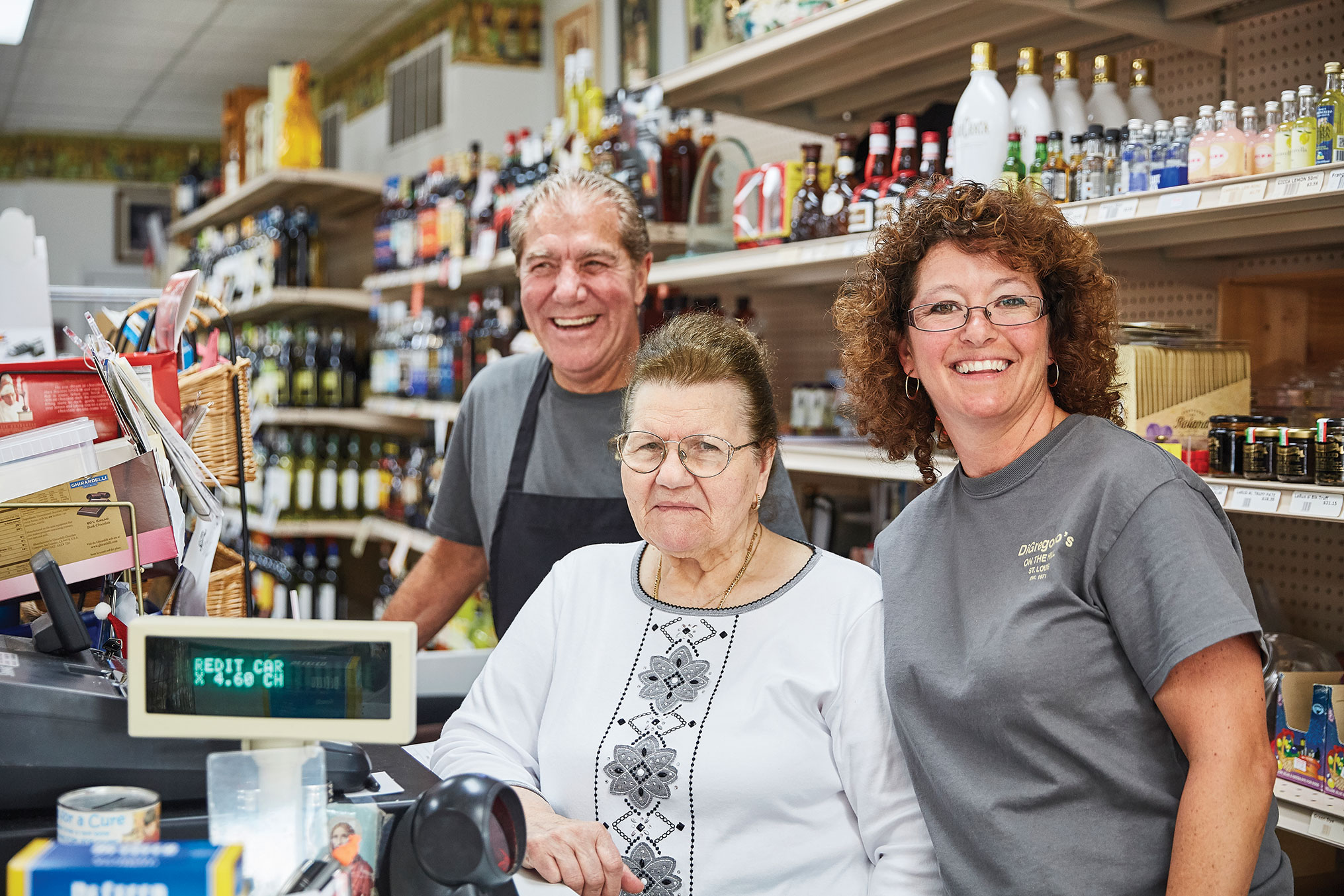 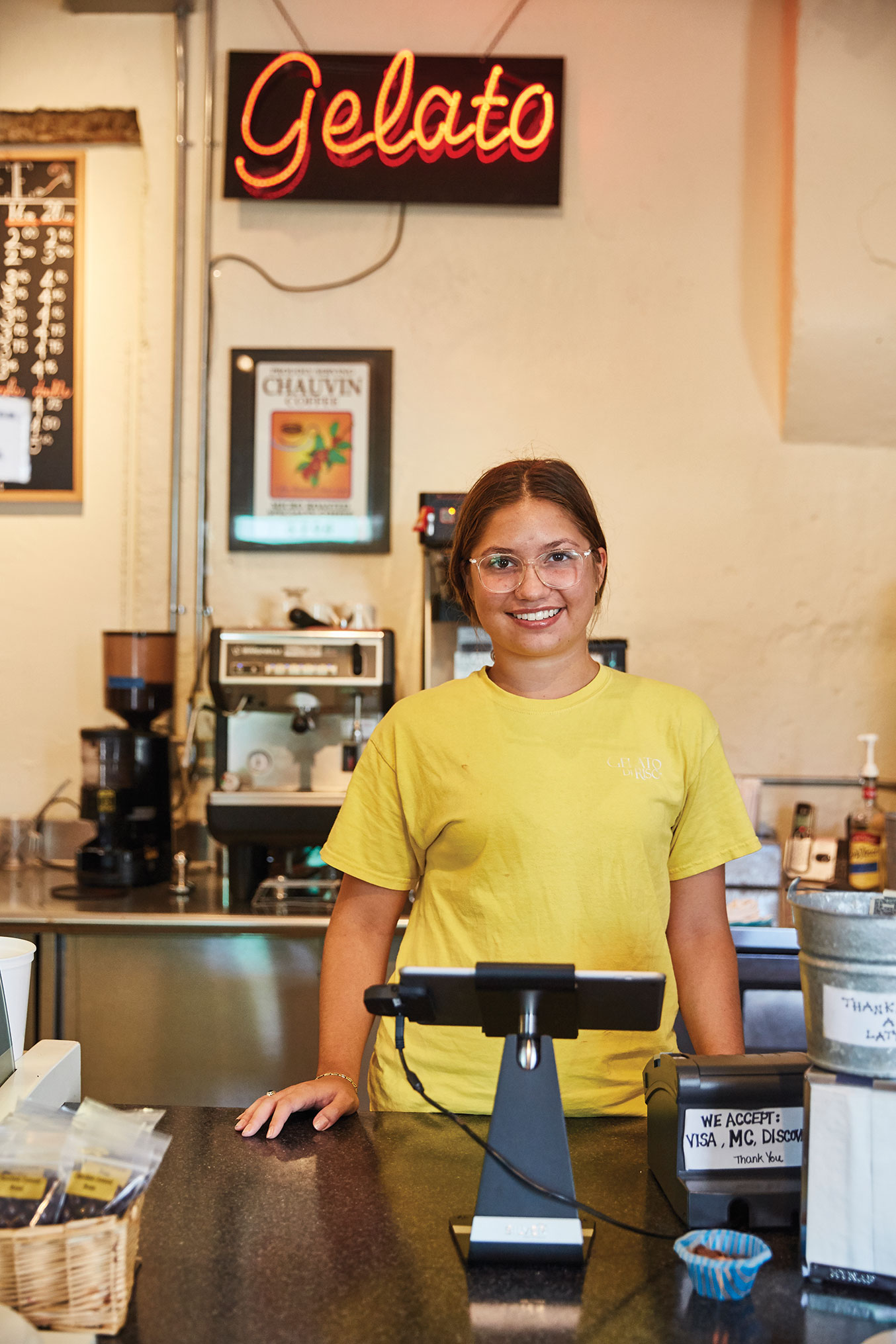 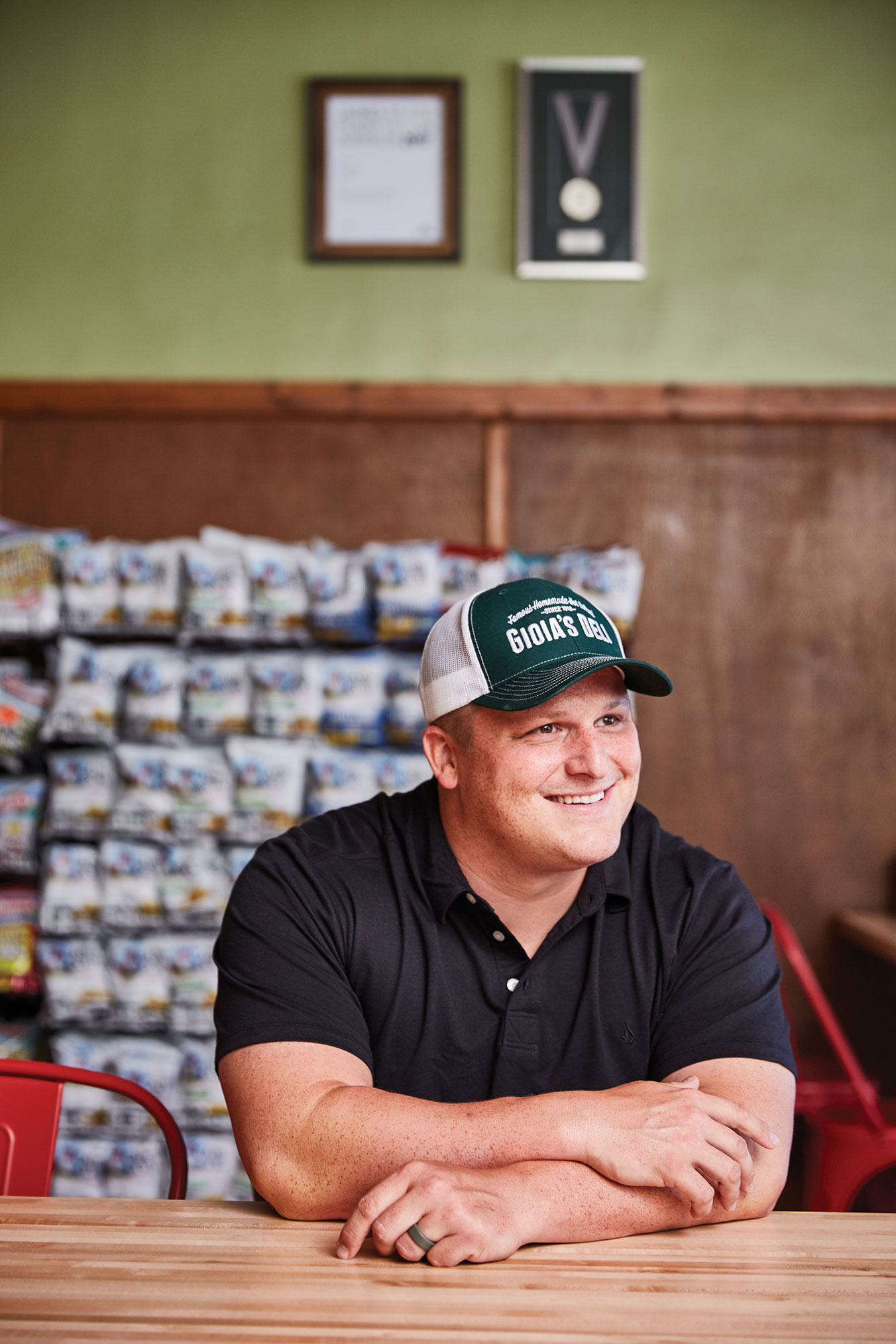 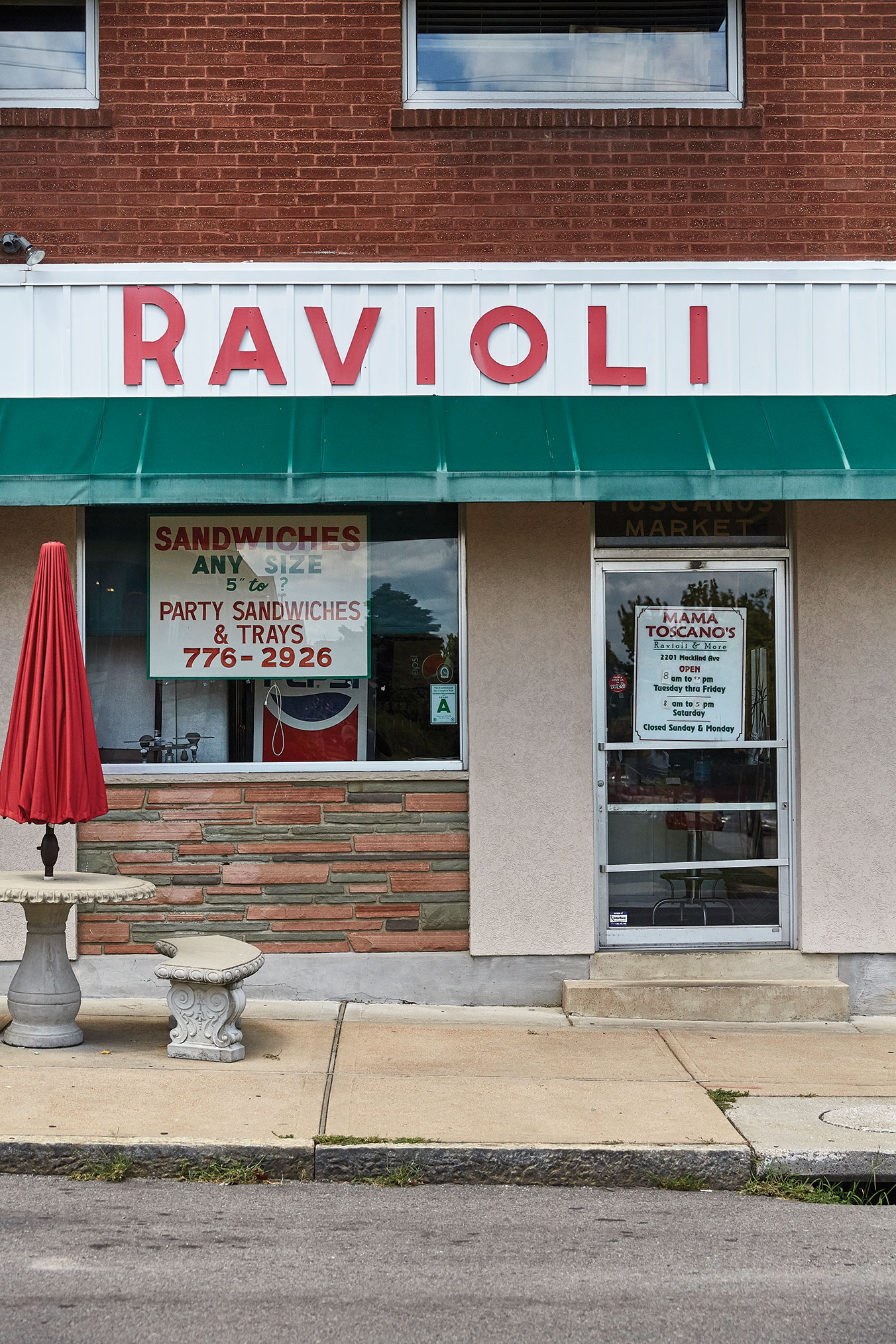 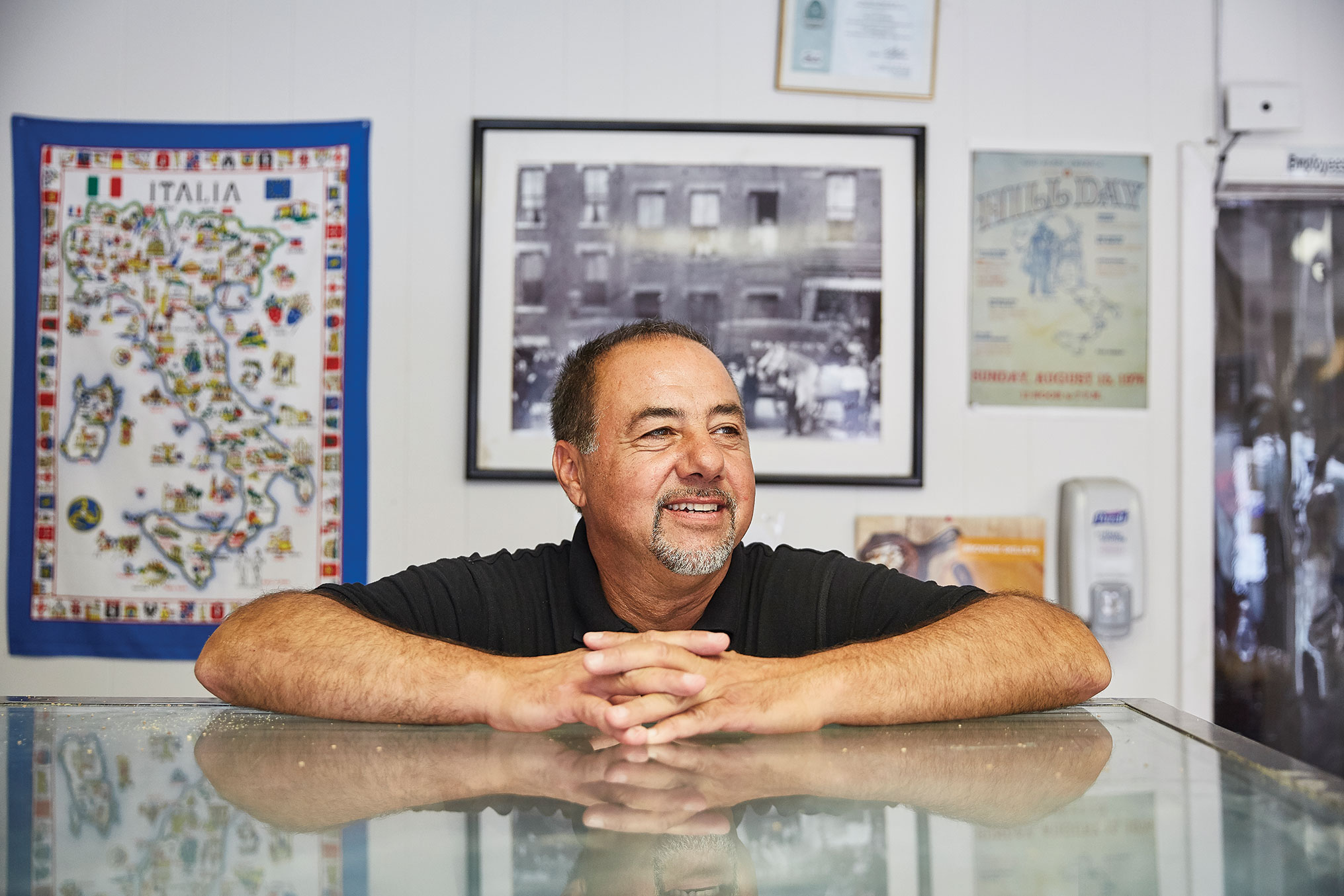 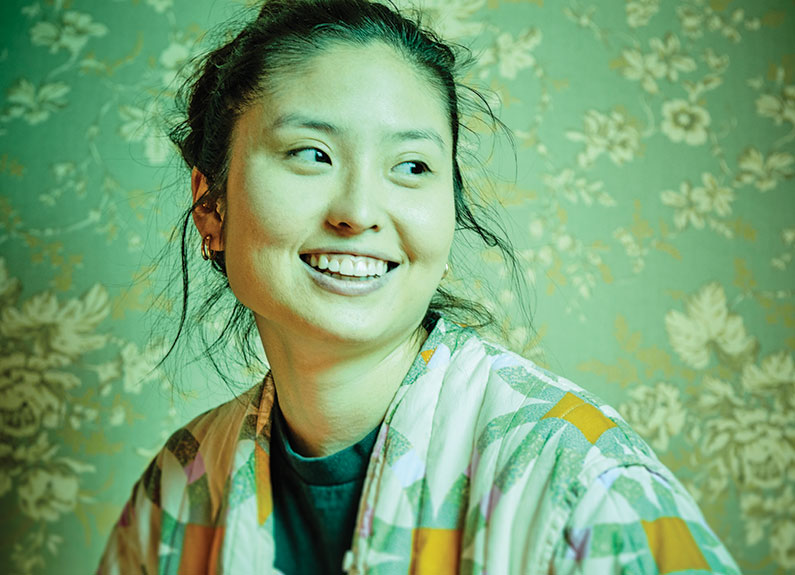 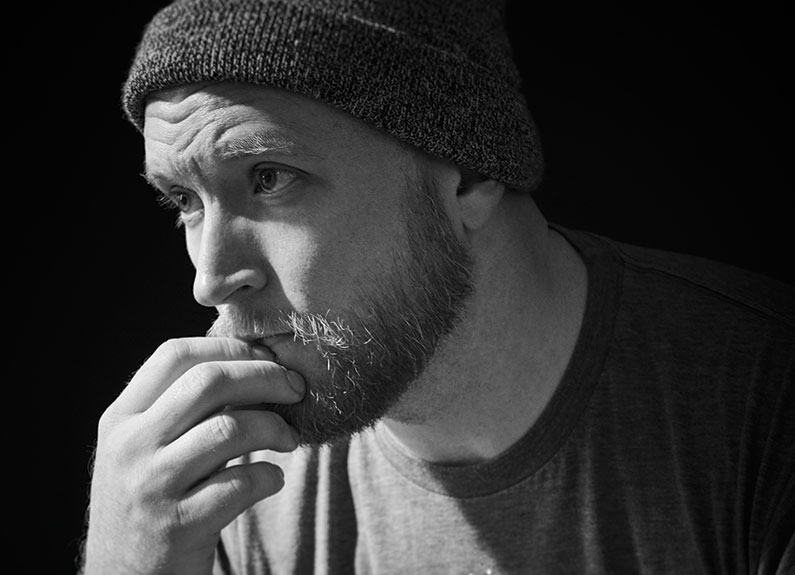 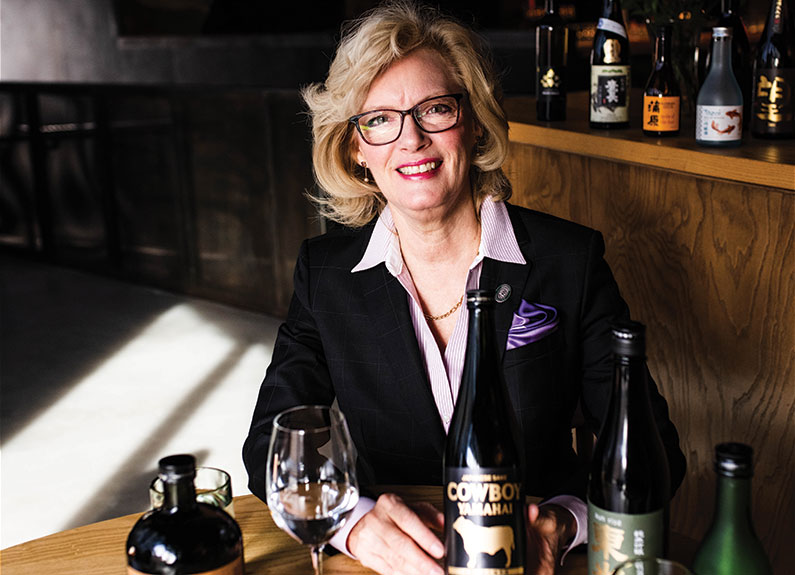