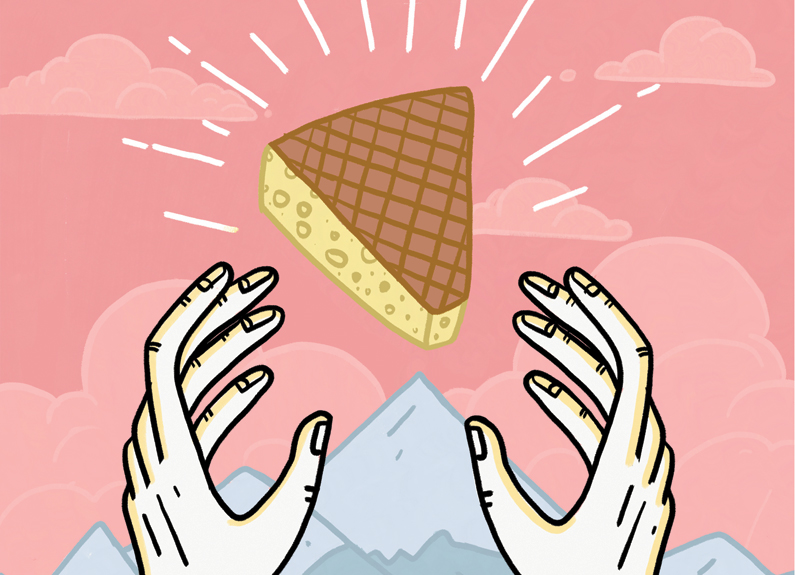 Jim Fiala has been around the world, tasting and learning as a diner and a chef. Lesson one: If you see something you’ve never heard of on a menu, order it. Lesson two: If you’re running a restaurant, take the time and effort to treat people well – this is the hospitality business, after all. His restaurants, The Crossing and Acero, are beloved staples in the local dining scene. Here, four meals Fiala shared while traveling with his wife, Melissa Fiala, that changed his life.

1. L’Auberge du Vieux Puits, Fontjoncouse, France, 2012
“We’re driving around in the mountains, and I say, ‘There’s a three-star restaurant down here – let’s go.’ We order this elaborate meal, and … you’re just blown away by every bite. Then they came out with the cheese course. They brought the cart by and there were 80 cheeses – 80 cheeses! They cut eight or nine pieces and told us what they were. I started working my way, and I got to No. 6. … It stopped me in my tracks, that one cheese. My wife looked at me and said, ‘Are you tearing up?’ And I said, ‘I don’t want to say I am, but I’ve never had a cheese like this in my life!’

"I asked, and they said it’s from a small farmer in the Pyrenees. He comes down once every two weeks with it. I have no idea what the name of that cheese was. It was just perfect, unmatched by any I’ve ever had in my life. Someday, I’m going back, and I’m going to find that cheese.”

2. Cal Sagristà, Peralada, Spain, 2012
“We went up to the Costa Brava for a couple days, this small town called Peralada. We were just walking around. I was like, ‘That looks like a cool restaurant, let’s go there.’ It was packed for lunch – we thought this must be the right place. I saw a shrimp carpaccio and thought. ‘I gotta get that.’ I mean, we don’t do shrimp carpaccio in St. Louis. It was those red shrimp just pounded out super thin on a plate and six or seven pieces of sea salt – that was it. … You know, Italian food is simple, but this was simpler. I didn’t think you could get simpler than Italy. It was perfect.”

3. L’Arpège, Paris, France, 1999
“I remember the good and the bad. My wife, Melissa, was pregnant and we went to Paris. Daniel [Boulud], who was my chef in New York, told me, ‘You gotta go to L’Arpège. [Chef Alain Passard]’s killing it.’ We walk in the door and say we have a reservation for Fiala, and they’re like, ‘Oh, you canceled that today.’ And I was like, ‘No, I was on an airplane. What, am I calling you from the plane and canceling a reservation? It didn’t happen.’ They’re like, ‘Sorry, we don’t have a table for you.’

"We walked out and started walking down the street in the rain looking at restaurants. Nobody else was busy, it was dark and I was just like, ‘Screw this, we’re going back.’ I went back and was like, ‘We made a reservation, we had a reservation, I want my reservation.’ I’m like, ‘She’s pregnant, are you gonna kick her out in the rain? Just throw her in the street and make her walk home, pregnant?’ He’s like, ‘Uh … I have a table for you right over here.’ Then we had an amazing meal, from start to finish.

"But I started thinking – how do I treat people? How should I treat people when they walk in and they don’t have a reservation, or I think they canceled? If I can’t get you a table here, can I call the place across the street? ‘I know a great restaurant, they’ll take care of you,’ or something. You have to figure out how to take care of people.”

“Melissa got dover sole, and I got turbot, and both of them were just… One had barnacles and different sea creatures in a herb sauce like a sauce verde – it was just mind blowing. The other one had crawfish and asparagus, and I tell you, I’ve never had a meal like that in my life. Atmosphere off the charts. They were there to serve people. They were in the hospitality business. The hospitality in Europe, it can be so bad, but when they get it, they get it at a level like you can’t believe. It was just a magical dining experience.”

Editor's Note: This piece ran in the August 2018 issue of Sauce with three meals. We added a fourth (Alain Ducasse) to the online version of the article.