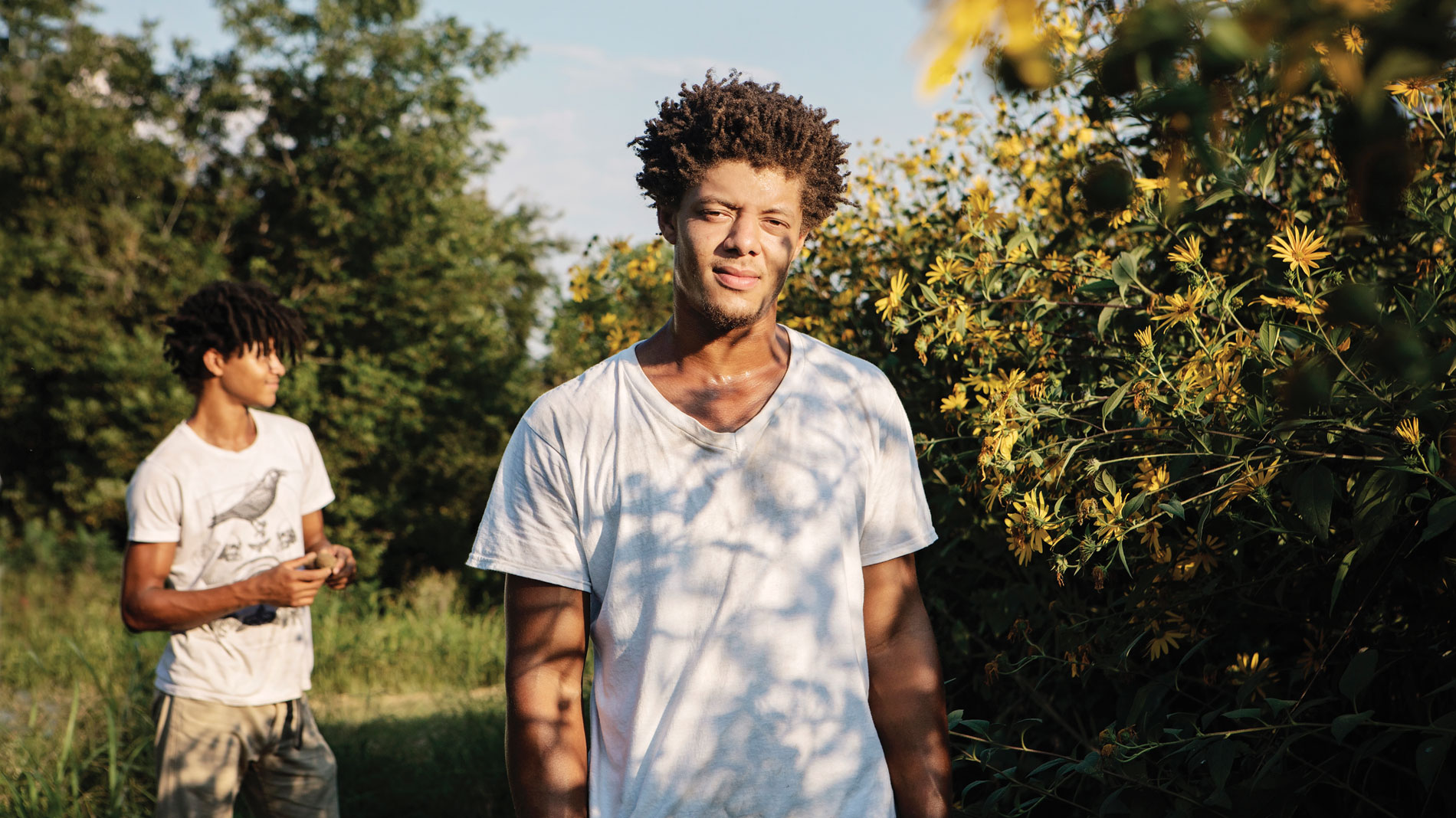 First-generation farmers in St. Louis forge their own paths

A new generation of young farmers is sprouting in a trade once dominated by single bloodlines and overall-donning white men. First-timers are buying land and setting up camp, choosing to venture into an industry known for grueling hours and even more grueling margins. These young men and women bring energy, collaboration and a scrappy entrepreneurship to the age-old business. But as newcomers to any industry will tell you, breaking in ain’t easy.

When Autumn Sij and David Blum bought land in DeSoto, Missouri, seven years ago, they had no intention of farming. They wanted to be homesteaders – live a little more hand-to-mouth, chop wood during the day and use it to keep warm at night. At the time, Sij, 25, and Blum, 28, had never successfully grown a plant or raised an animal, besides a dog.

“I did have an aloe plant, and I killed it,” Sij chuckled. “That’s how much of a black thumb I had.”


Once they started growing on their land, the gravity of everything they didn’t know about this very costly, very complex industry hit hard. “We were at a disadvantage because we had so much infrastructure to build,” Sij explained.

Some of their competition were fourth-generation. “Their great-granddads built everything. Well, me and Dave are the great-granddads. Realizing you’re at the very infancy of something people are trained to do their whole lives was a lot to realize.”


After sharing their first bunch of kale with close friends and local chefs Josh Poletti and Josh Galliano, the food insiders began taking Sij and Blum to barbecues and parties, introducing them to like-minded chefs around town.

Today, Such and Such Farm is home to a thriving vegetable garden, more than 50 pigs, seven goats and so many chickens and ducks Sij and Blum have lost count. They credit much of their success to the collaboration they have with chefs like Poletti and Galliano. Each fall, they sit down with chefs to look through a seed catalogue.

“They get to circle whatever they want,” Sij said excitedly. Through this process, Such and Such has fulfilled requests for everything from rare vegetable varieties to a pig finished only on barley and strawberries for its last 130 days.


Local chefs were also vital to the education and development of David Bohlen, the 25-year-old farmer running Bohlen Family Farms in Perryville. He credits much of his business’ growth to local chefs-turned-teachers like Bakers & Hale chef-co-owner Rex Hale and Vicia co-owners Michael and Tara Gallina.


Bohlen started out growing on a tiny plot of land near his home in Ferguson after he realized how expensive it was to eat as well as he had growing up. He was able to expand after meeting Clyde Bruckerhoff, a multi-generation farmer. They hit it off, and Bruckerhoff offered Bohlen the opportunity to grow on his land in Perryville.


Being a young, black farmer with an unknown name made it even more difficult to break into this legacy-led industry. “When I was bringing stuff to restaurants, they were like, ‘Dude, you didn’t grow this shit.’ I’d be like, ‘Yes, I grew it. I harvested it. I brought it all the way here, and now you guys are playing games.’


“I was probably as far away from what they thought a farmer looks like as possible, so that was a hard sell at first. It was difficult for people to wrap their head around. People see me walking down the street with my arms full, I’m running deliveries, and [they think], ‘Did he just steal that shit?’”

As Bohlen became more established, that changed. Today he finds teachers everywhere he goes – from Bruckerhoff and his brothers, whom Bohlen said can do everything “faster and cleaner than I do it right now,” to restaurant clients. The owners of Wei Hong Bakery taught him the perfect moment to harvest his Chinese broccoli. Hale taught him the mold growing on his corn crop was huitlacoche – a sought-after, edible fungus considered a delicacy in Central Mexico.


And when a group of Mexican workers asked if they could buy the blossoms from his squash, which he gave them for free, he realized he still had a lot to learn about the food world.

“They picked every last blossom out of that field!” said Bohlen, still in shock. “For them to stop, you know, struggling speaking English, and then spend all the time on their hands – because squash plants have these like fiberglass thorns on them that break off into your skin when you play with the plants – that’s obviously something special.”


An agriculture major who always knew he wanted to farm, Matt Tiefenbrun has a slightly different story. Growing up, he was always playing outdoors or messing with the tractors and tiny plastic animals on his toy farm. His parents weren’t farmers, but that didn’t stop him from getting his first cow in eighth grade.

Once he started his degree, however, Teifenbrun quickly realized that, much like the farming industry, the agricultural education system wasn’t meant for newcomers.

“School didn’t teach me about the real world,” he bemoaned. “It was for when your parents hand you a farm. It’s like impossible to make any money. If you weren’t given land, it’s virtually impossible. So you have to find your little niche thing. A new guy getting into it, it’s tough ’cause it takes so much money, and the margins are so slim.”


With a crisp new degree and the little money they had in the bank, Tiefenbrun and his wife, Eleanor Tiefenbrun, both 22 at the time, bought land about three hours outside St. Louis in California, Missouri. They started in the one area of farming he felt school prepared him enough to succeed in: chickens. He committed to farming true pasture-raised birds. His dad handled marketing, and his wife designed the logo. Having the support of his family proved critical in landing those first few accounts like Farmhaus, Winslow’s Home and Cardwell’s.

“My mom and dad had my back the whole time,” Tiefenbrun recalled with near disbelief. “If it was my kids, I’d be like, ‘No, you’re an idiot.’”


Since then, Buttonwood Farms has grown to 310 acres across multiple locations. Teifenbrun still raises chickens who forage with the sun on their backs, but turkeys and his beloved cattle have also joined the crew. So has his 2-year-old daughter, Alice.

The arrival of Alice opened his eyes to a marketing tool many young, new farmers like Bohlen, Sij and Blum harness for a competitive edge: Instagram.


“I’ve been getting more and more into social media,” Tiefenbrun said almost begrudgingly. “Eleanor was always wanting me to, and I didn’t see the point, and then you see all these people who are liking this stuff and all these chefs that we’re not working with yet but I want to, so that’s really cool. And Alice is really cute, so that helps!”


While the industry has always run on the kind of personal connection Bohlen has with Hale and Sij and Blum have with Galliano, tools like Instagram are disrupting the way those connections are usually made. Social media is providing young entrepreneurs a level of connection between farmer, chef and diner unattainable to past generations.

For Bohlen, social media is part marketing, part education and, like the rest of his 20-something peers, part a place for him to share what he eats and cooks and the people he meets along the way. Follow @BohlenFarms, and it’s like you’re right there on the farm with him, watching as he and his brothers pull the husks from freshly harvested sweet corn, rub granules of dirt from the sunchokes to reveal their deep red coloring and describe what lambsquarter (aka wild spinach) tastes like.


This yearning to connect, to teach, isn’t lost on Sij and Blum, either. Follow @SuchandSuchFarm on Instagram to meet a goat named Marilyn Monroe and a pig named Gert Gert. See ruby-red orbs of pre-harvest hibiscus and grassy green heads of flowering Chinese cabbage. Learn about Goat Yoga, an annual event on the farm where you can get your downward dog on surrounded by sweet baby animals.

“When we first started farming, I had no idea that people would want to follow a farm on Facebook or Instagram,” said Sij. “But it plays a huge, huge part. I love it, because we can show our daily lives, and people can see what goes in a daily life of a farm. It makes them care more. Whenever you know our faces, know our animals, the joys and sorrows of farming, it almost makes the food and the meat taste better because you care about it.”


It’s no shock that these young farmers are doing things differently. They chose to wake up at 5 a.m. and spend 16 hours a day on their hands and knees, to spend their time feeding chickens and building pastures and milking goats without the pressure to stay in a family business. They have chosen a hard path, one filled with the type of work that leaves your skin tanned and your muscles sore, and they have come out the other side strong, successful and growing.


In doing so, they’re inspiring the next generation of the industry, from 2-year-old Alice waddling around with chickens to the curious college kid learning how to grow and cook great, simple ingredients from Bohlen and his brothers on Instagram. These young farmers are offering what they so passionately sought out just a few years earlier: knowledge, ideas, confidence.


“I honestly hope our story, through social media, can help other people do exactly what we did,” said Sij. “Because we went into this whole thing completely blind and not knowing – learning and learning as we failed. You can do this, too. You can take a leap. I hope it can be an example that you don’t have to be born a farmer. You don’t have to be really, really knowledgeable to follow something you love. Anything is possible – just follow this little farm in DeSoto, Missouri.”