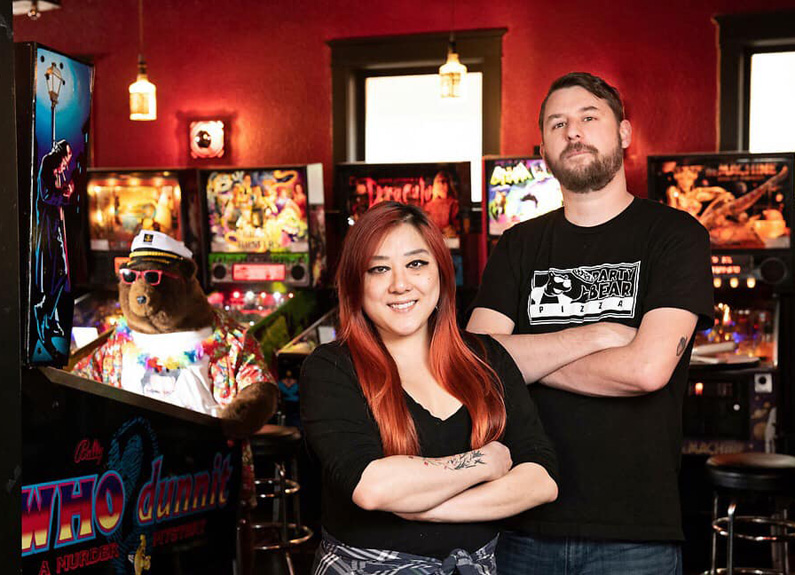 Prepare to eat, party and play pinball. Melanie Meyer and Chris Ward will open Party Bear Pizza and Tiny Chef in The Silver Ballroom kitchen today, April 10, combining pizza and Korean-influenced fare. The unusual moniker is a combination of Meyer’s nickname, Tiny Chef, and Ward’s penchant for bringing a large stuffed bear to parties, becoming known as the “the dude with the party bear.”

The Silver Ballroom, located at 4701 Morgan Ford Road, is a pinball pub with punk rock vibes. Meyer and Ward are longtime friends of The Silver Ballroom owners, and Meyer said they jumped on the opportunity to rent out the kitchen.

Ward got his start in the culinary industry working in his family’s pizzeria, Pizza Unlimited, at 13 years old. Meyer has worked with the likes of The Midwestern Meat & Drink chef-owner Ben Welch, who gave her the Tiny Chef nickname. Meyer said this is the first time either has owned a restaurant and they liked the chance to run a kitchen with low overhead.

“Chris and I are an unstoppable team. He gives me the confidence to do what I do,” Meyer said.

The restaurant will offer two separate menus: one for pizza and one for Korean cuisine. Meyer, who was born in South Korea, said she had a hard time finding Korean food in St. Louis. “Everything I do is inspired by culture,” she said. “I wanted to do something different and showcase my own culture.”

Meyer will offer traditional Korean dishes like bulgogi beef and chicken, soused in her house-made sweet-spicy Dragon Sauce. Another original sauce on the menu is Meyer’s orange-, ginger- and plum-based Pixie Sauce. The menu will also feature char siu pork belly and tofu dishes, as well as house-made kimchi.

Ward will prepare 7-inch pizzas in a pizza oven with traditional toppings like pepperoni, sausage and vegetables. He’ll make the dough and sauce in-house, and use them for custom creations as well, like The Hoosier with ham, mushrooms and onions. Ward will also offer frozen pizzas to go.