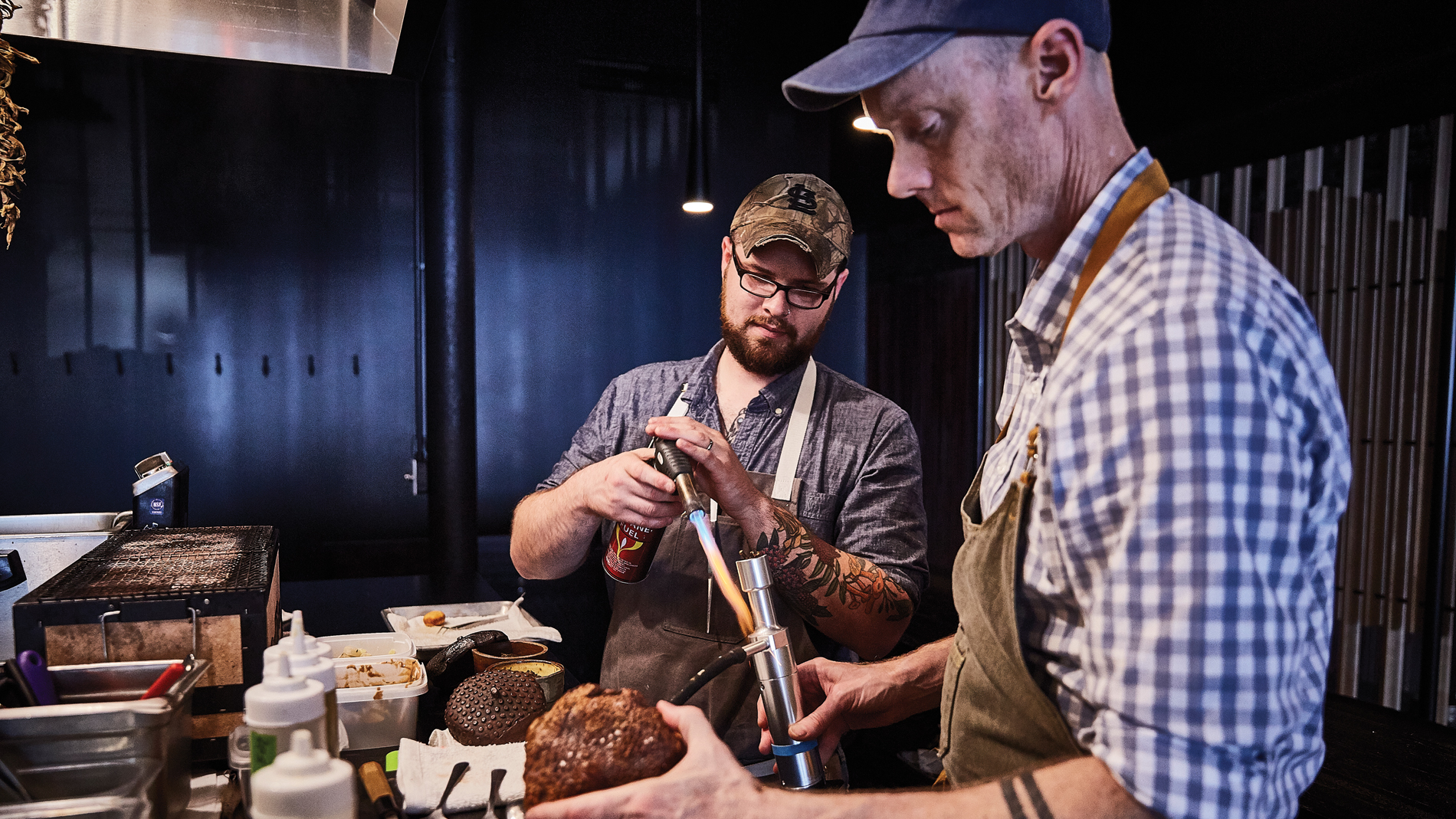 It would be tempting to dismiss as pretense and gimmick a restaurant based entirely on interpreting Ozarkian food through a modern lens. But when chef-owner Rob Connoley explained our tasting menu at Bulrush was “taken from the period of the Ozarks between 1820 and 1870,” and told a story behind each course, there was no denying the restaurant is honest and special … and that the man spends a lot of time in the woods.

After nearly three years of fits and starts, Connoley opened his hotly anticipated, seemingly impractical but infinitely imaginative restaurant in the Grand Center Arts District. It is a stunning space designed to reflect the restaurant’s focus on foraged food rooted in Ozark cuisine.

With Bulrush, Connoley reprises the philosophy behind Curious Kumquat, the foraging-forward restaurant he operated in Silver City, New Mexico, which enthralled food writers from The New York Times to Saveur and garnered the self-taught chef a 2014 James Beard Best Chef: Southwest nomination.

Now, Connoley can expand his passion for foraging, this time with more abundant seasonal options obtained through his relationships with numerous area farmers and landowners.

Between moving home in 2016 and opening Bulrush in April, Connoley consulted historians and studied journals, letters and other historical documents from the early 19th century to learn what people in the Ozark region grew, hunted and ate.

At the same time, he enamored adventurous eaters with a series of exciting and curious pop-up dinners and operated Squatter’s Café, a gem of a counter eatery he ran inside the KDHX building with Justin Bell, now Bulrush’s sous chef.

From acorns, black walnuts and persimmons to elderberries, bluebell flowers and pawpaws, every dish incorporates some foraged component paired and presented in unusual and unexpected ways, conveying the coy experimentation Connoley thrives on.

And no, Bulrush does not serve squirrel – though I did overhear the affable Connoley describe one of the dishes during a recent seven-course meal as including “nearly everything a squirrel eats because I couldn’t serve the squirrel.”

Only Connoley’s mind could take a few ingredients a squirrel eats and reimagined them into that dizzying dish: a fried doughnut made with acorn flour and composed around a chunk of rutabaga under a pillow of white chocolate-potato mousse and a drizzle of hazelnut praline sauce.

On top, a single leaf of Swiss chard soaked in black walnut pickling liquid and dehydrated to resemble “a leaf on the forest floor.” Persimmon wood, Connoley explained as we stared dumbfounded, provided the smoky flavor. Suspense preceded the whimsical when Connoley first placed the dish in front of us – a covered vessel handmade to resemble an acorn.


If Bulrush could serve squirrel – or opossum or grouse or raccoon, for that matter – I’d eat it solely based on how Connoley uses meat. Pork coppa, a meaty shoulder muscle with remarkable tenderness and flavor, was new to me. Comparing it to a boneless pork steak, Bell explained they’re fortunate to source it from a butcher in Illinois.

A tart, acidic sauce made from wood sorrel helped cut through the fattiness of the meat, while fermented wheatberries, pattypan and zephyr squash, marinated raw zucchini and chanterelle mushrooms completed the course, one of several in a never-wearying procession.

More pork, ground with venison into a coarse forcemeat topped with braised collard greens, made for a quirky little dish when capped with a thin, opaque disc of aspic gelee made from green tomato consommé. A couple bites in and the mellow bitterness of the tender greens, along with the lively acidic tones of a German pinot blanc paired with the dish, perfectly balanced the meat’s richness. A couple acorn crisps on the side provided nutty crunch.

Another course, a compare-and-contrast study in what our eyes see and what our brain registers as taste, consisted of two little orbs in a bowl with pickled strawberries, green tomato marmalade and a yucca blossom. On the tongue, one felt like ice cream but tasted of creme fraiche and yogurt. Biting into the solidified shell of the other and a rush of amazake – fermented sake brewed from Missouri jasmine rice – filled the mouth with delicious, shocking sweet liquid.


Cocktails, both boozy and spirit-free, also abide by Bulrush’s self-imposed construct due to the impressive resourcefulness of bar manager Chris Voll – previously known for his cocktail wizardry at Elaia and Olio – and his team of similarly devoted bartenders.

Citrus wasn’t available in the Ozarks, so Voll makes fruit vinegar to stand in for lemon, lime and orange. For sweetness there’s local pawpaw and honey. Aromatic spiciness? A little sprig of spicebush or cardamom goes a long way.

All wines are organic, natural or biodynamic and reflect the critical role Missouri rootstock played in the 19th century wine industry, from the German immigrants who settled Hermann and learned to cultivate native grapes out of sheer necessity to saving many French vineyards from a blight of aphid-like insects.

Voll did a great job explaining the Missouri connection to the German and French wines he was pouring as part of the smart pairings, but what a treat it would have been to toss in a couple of Missouri’s lesser known dry wines, like a big and brambly Norton (our state grape), a tranquil medium-bodied chambourcin or a crisp seyval blanc.

Bulrush offers a handful of meal-size entrees available at the bar with no reservations needed. I liked the venison, a ground and grilled patty painted with black walnut-barbecue sauce served over Missouri jasmine rice, but found too much competition between the accompanying cabbage kimchi, tomato-infused cucumbers, spring onion salad and final drizzle of persimmon tzatziki sauce.

Still, the bar is a good way to experience Bulrush if you’re not ready to commit the time, energy and expense to the tasting menu (for which your credit card will be billed when you make a reservation online).

At the end of seven courses – after experiencing Connoley’s alchemy of molecular gastronomy combined with hyper-seasonal foraging, drinking good wine and learning a thing or two about Ozark cuisine – we were presented with a little gift box to soften the blow of the bill. (However, prices at Bulrush are all-inclusive, meaning everything, from a $5 Busch tallboy to the $100 seven-course dinner, include tax and tip.)

Inside, there’s a souvenir menu and a persimmon cookie so tempting I wanted to gobble it in the car despite my utter satisfaction. The box also includes a couple of persimmon seeds that you can plant, just in case you prefer gardening to foraging.

Vibe // Sophisticated and spare without feeling affected or aloof

Michael Renner is a longtime