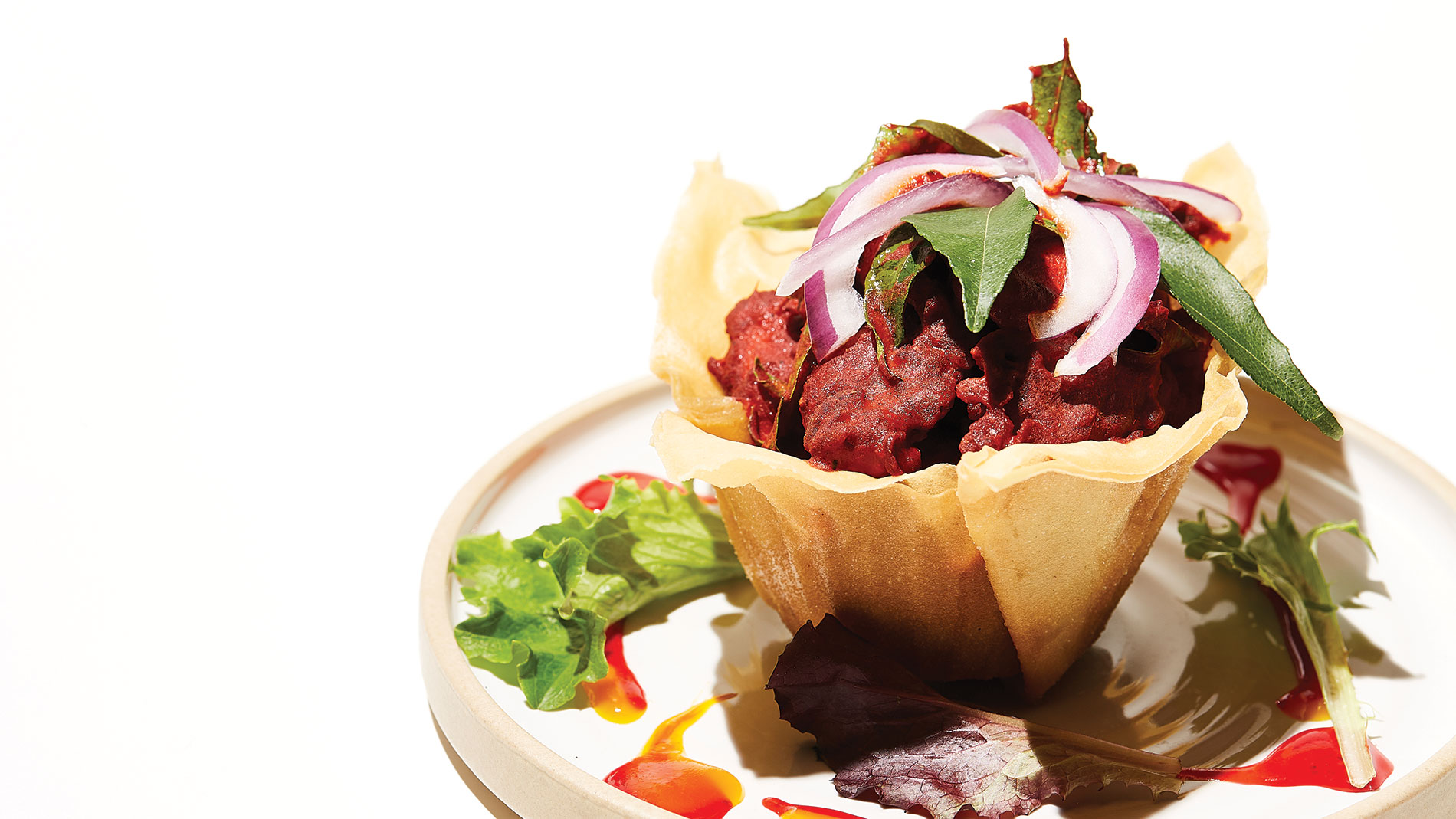 In St. Louis, the majority of Indian restaurants concentrate on the country’s northern style of cuisine with classics like tikka masala, butter chicken and numerous variations of paneer.

But have you ever had chicken 65 bezule, a popular snack from the coastal city of Mangalore? What about thakkali rasam broth from the southern state of Tamil Nadu? Or green beans thoran-style from the state of Kerala? There’s naan, sure, but how about dosas or uthappams?

First-time restaurateur Naveen Chepuri and his two co-owners are responsible for shifting our focus beyond what we’ve come to expect from Indian food in St. Louis. Turmeric in the Delmar Loop looks to the country’s five southern states in dishes rich with coconut, seafood, tamarind, lamb and an array of spices offering varying degrees of heat.

Chepuri and his partners knew what they wanted and also had the sense to know what they didn’t know about the restaurant business. The group hired chef-consultant Alagesan Panneerselvam, who, after surveying our local culinary landscape, drew upon his Tamil Nadu birthplace, experience in Indian hotels and history opening restaurants in California, Virginia and North Carolina to develop the menu. His former chef de cuisine, Kishore Reddy, is now the executive chef.


Tamil Nadu boasts a brilliant array of cuisines and is home to some of the spiciest, most aromatic food in India. For instance, Turmeric’s thakkali (tomato) rasam (juice) broth, the menu informed, was a “Chettinadu village-style soup flavored with tomato, coconut, coriander and black pepper.” I call it an exhilarating elixir made with tamarind juice and aggressively spiced enough to soothe any winter illness.

Chicken 65 bezule is a common bar snack and street food that rivaled any Buffalo-style wing I’ve ever tasted. Fiery red, spicy chunks of boneless chicken marinated with intoxicating spices too numerous to list are stir-fried with curry leaves, hot peppers and yogurt curd. Serving it in an edible bowl made from lentil and rice batter added to its appeal and illustrated how presentation sets Turmeric apart from the standard template. Showing off its Indo-Chinese roots, crispy cauliflower Manchurian bezule – batter-coated florets tossed in a sweet and spicy chili sauce – was no less enticing.


There is an entire section of the menu dedicated to dosas and uthappam. The former are long, thin floppy-crisp crepes made from fermented rice and lentil batter filled and rolled like a newspaper. The truffle masala dosa consisted of a spiced potato hash, chopped cashews and curry leaves. It was griddled with truffle oil you could actually taste – another sophisticated touch.

Made from the same batter, the single uthappam option comprised four variations of the thick, soft pancake: shallots and chili, wild mushroom, cheese, and spinach and asparagus. Both batter breads were cooked on a large flattop grill in the dining room and served with the classic accompaniments of chutneys (tomato and coconut) and sambar, a lentil-based, curry-seasoned chowder.

Several northern Indian entrees are offered, including chicken tikka masala and butter chicken. But compared to their one-note flavor, Turmeric’s special chicken curry offers so much more piquancy, depth and color from its silken, fragrant gravy, packed with classic southern flavors like coconut, turmeric, tamarind and a list of spices the length of your arm. Also from the south: Green beans thoran with shallots, curry and shredded coconut was by far the favorite dish during one visit.

Do not overlook the Turmeric Creations section of the menu, featuring modern, upscale dishes like chargrilled masala halibut roasted in a banana leaf, finished on the grill and served on a bed of spinach poriyal (stir-fried) with a creamy yogurt fenugreek sauce so delicious I’d pour it on toast. Or try the chakra murgh: chicken cooked in puff pastry with spinach, creamy potatoes and more of that crave-worthy fenugreek sauce.

For lunch, about half the a la carte small plates from the dinner menu are available, along with several curries of the day, rice and biryani dishes, and breads. You can try a little bit of everything with a lunch platter – vegetarian, meat or the Turmeric Special combination platter – consisting of eight to nine items for the bargain price of $11 to $13.


Turmeric changed few design elements from when the space housed Público. The open kitchen is now enclosed, slightly reducing the number of seats, but those stylized, dark wood tree branches still jut out above the booths, and the U-shaped bar still dominates.

You can play it safe with any number of classic cocktails from the bar, or you can veer into new territory with Turmeric’s specialty cocktails like Mary Ka Badla, a spicy Indian take on the common bloody mary.

It’s another example of how Turmeric colors outside the lines of the St. Louis Indian restaurant template and offers a broader palate from across the subcontinent’s cuisines and influences, making it an exciting and welcome addition to the local restaurant scene.

Vibe // The warm and inviting space maintains many design elements of its predecessor, Público, for an upscale feel.