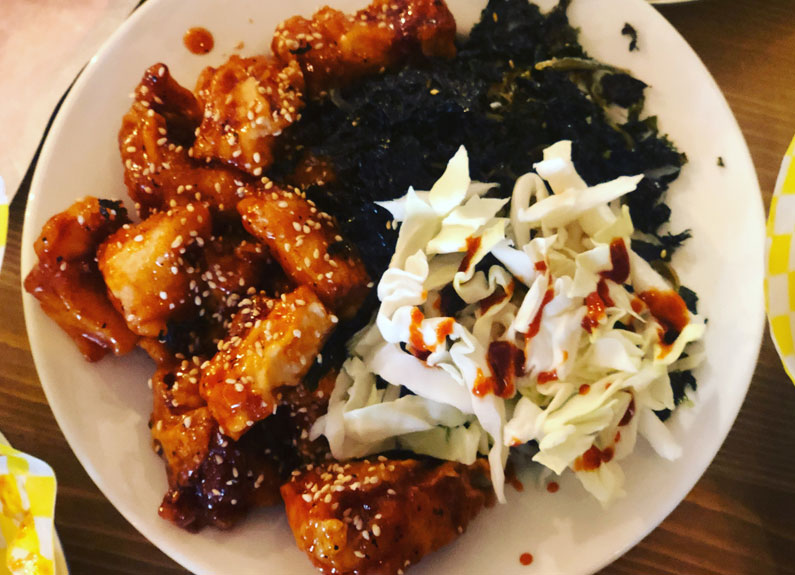 Currently, Chicken Seven's 1800-square feet space is not doing dine-in service, but the duo plans to have four tables on the outside patio available for dine-in early this fall. For now, Chicken Seven offers delivery through Door Dash and carry-out.

As far as the restaurant's current menu, Chicken Seven's specialty is its crispy chicken. “First, we marinate the chicken overnight in ten different spices," Park said. "Korean fried chicken is cooked for a longer time, so the chicken comes out crispy and you can even set it out overnight, and it’ll still be crispy the next day.” Another key to the crisp factor, Park explained, is making the coating on the chicken thin before frying and then once it’s out of the fryer brushing the sauce on top instead of soaking or dunking it.

The restaurant has seven signature sauces to flavor their chicken including: original fried, soy garlic, spicy soy garlic, yum yum, fresh pepper garlic, honey garlic and buffalo. “We make all our sauces from scratch, except the buffalo," Park said.

On the beverage side, Chicken Seven offers sparkling ice tea in peach or lemon. Once Chicken Seven opens for dine-in service, Park and Lee plan to also serve draft beer, including one Korean beer and cocktails made with soju – a distilled grain spirit.

Eventually, Chicken Seven plans to expand their menu depending on the reception from the neighborhood. “We are going to add spicy chicken on a skillet; we are going to add more beer. We are just testing out all of these munchies and trying to see what this neighborhood likes the most,” said Park. Once the dining room is open, the restaurant will play Billboard and Korean music videos on a mounted TV screen.

Correction: A previous version of this article named one of Chicken Seven's sauces, original fire, it's original fried.