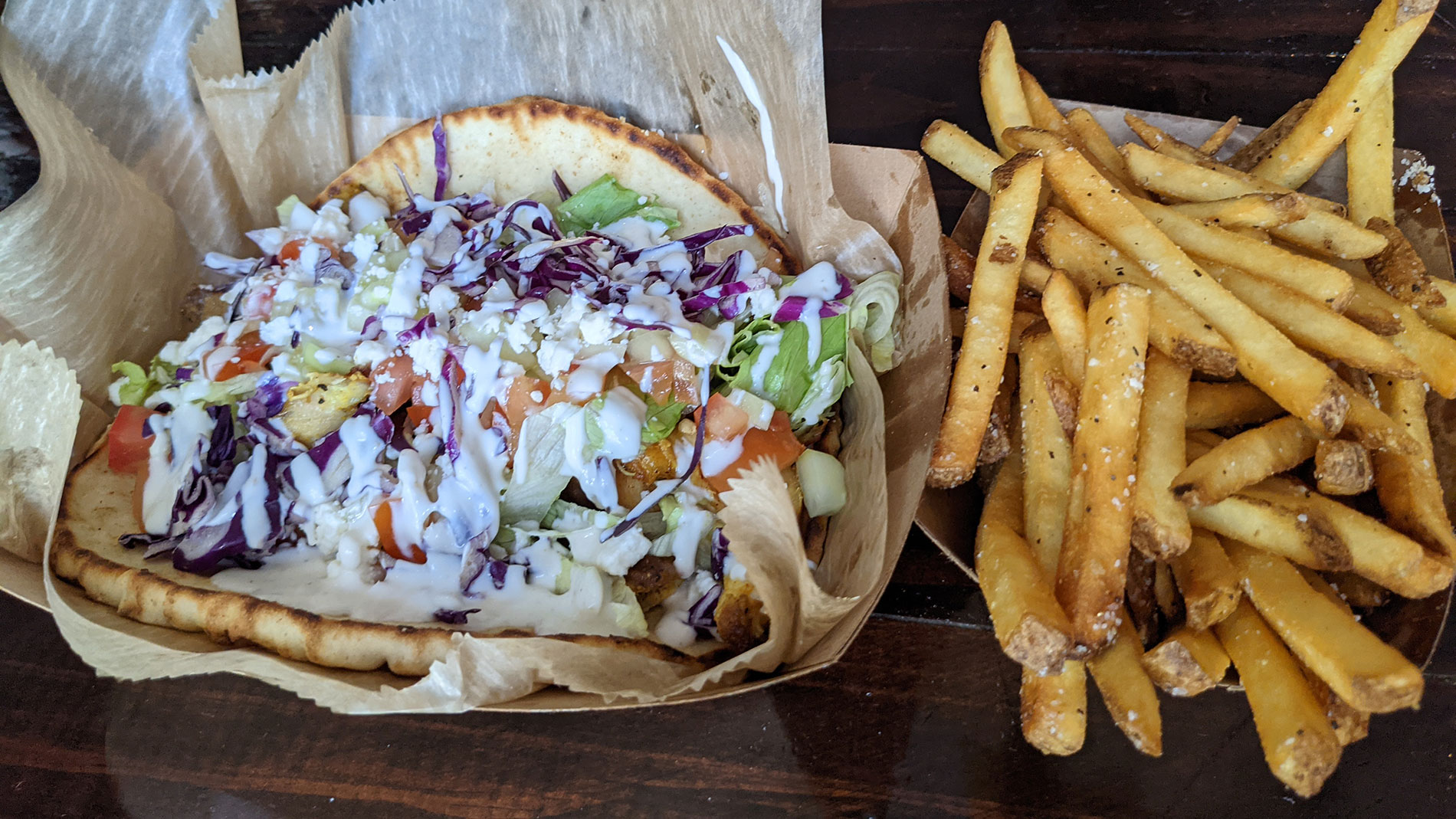 Tres Equis is owned by the same team as neighboring soccer pub Amsterdam Tavern, and customers can order food from Tres Equis to take over to its sister pub. Co-owner Jeff Lyell said getting the kitchen up and running again was a vital step forward for Tres Equis. “Tres needs to have the kitchen open to bring people in,” Lyell said. “It's not that established yet. Amsterdam could go on in perpetuity with nothing else and it would be fine, but over here we really had to have food.”

Lyell and co-owner Matt Stelzer spent a month eating around town for inspiration. “I would go and pick up bread from different Bosnian bakeries and buy different gyros and buy different kebabs,” Lyell said. “Places all up and down Gravois basically is where we did our homework for that part.”

They knew they weren’t trying to reinvent the wheel. They needed food that their customers – not just at Tres Equis, but also at sister pub Amsterdam Tavern – would enjoy. Another priority was to offer food that can be held and eaten comfortably while watching soccer and other sports in two bars that are known to get crowded during big games.

“We thought, ‘Why don't we just do the things that we like here,’ like gyros, chicken kebabs, burgers and fries and wings,” Lyell said. “And find someone who can do it really good for us. It just seemed easier for us to do it ourselves than to keep looking and waiting.”

Lyell and his partners brought in chefs Emmy Anguyo and Jeff Robinson to head up the kitchen at Tres Equis. Both Anguyo and Robinson cooked at The Dam previously, which until May 2022 served burgers and Belgian-style fries from the space between Amsterdam Tavern and Tres Equis. Incidentally, that space is set to reopen imminently, with new tenant Sando Shack serving up Japanese-inspired katsu sandwiches.

“We're not doing stuff that's really hard, just do it really well, take some time and put some care into it,” Lyell said. “That's all you need. We don't want to have 50 things on the menu. We just want to have six or seven good ones.”

Among the signature additions to the menu are the generously portioned doner kebabs. Customers can build their own kebab, choosing from 8 ounces of rotisserie chicken or beef and lamb and a selection of toppings: red onion, red cabbage, lettuce, tomatoes, pickled cucumber, feta and garlic yogurt sauce. The ingredients are piled atop fresh, spongy pita from Cham Bakery.

The pita is pliable enough that you can wrap your kebab for convenient eating, and crucially, it’s structurally sound – this kebab won’t get soggy and disintegrate in your hands. If you like a falafel instead of kebab meat, the build-your-own falafel sandwiches offer the same menu of toppings, this time with three fried falafel.

The burger selection continues with the create-your-own formula. Choose from one, two or three 3-ounce patties, then add your favorite burger toppings: five different types of cheese, as well as lettuce, tomatoes, onions and pickles. There are also three specialty burgers, a grilled cheese and a BLT, the latter two both served on sourdough.

To round out the food menu, you can have a pound of wings, tossed with a barbecue dry rub if you like, tacos (beef or chicken), or a salad. Whatever else you order, make sure you have an order of the fries.

The kitchen at Tres Equis will open at 11 a.m. from Wednesday to Monday. “Right now closing time will be a little fluid, probably between 7 p.m. and 9 p.m.” Lyell said. He added that he hopes the kitchen and the bar will be able to stay open later, but that depends on staffing and customer habits. “People's habits have obviously changed,” Lyell said. “People just aren't staying out as late as they used to, but I think it's going to eventually go back. Maybe not fully, but to where maybe people are staying out till 1 o'clock again.”

In time, Lyell said early risers who come to watch European soccer on the weekends can also look forward to the kitchen at Tres Equis being open for them. And there’s the small matter of a World Cup approaching in November, which will see soccer fans from around the St. Louis region cram into Amsterdam Tavern and Tres Equis to watch their favorite teams. “We've got six weeks till the World Cup starts,” Lyell said. “We've got to get everything in line and all of our processes in order for a month straight of lines out the door.”