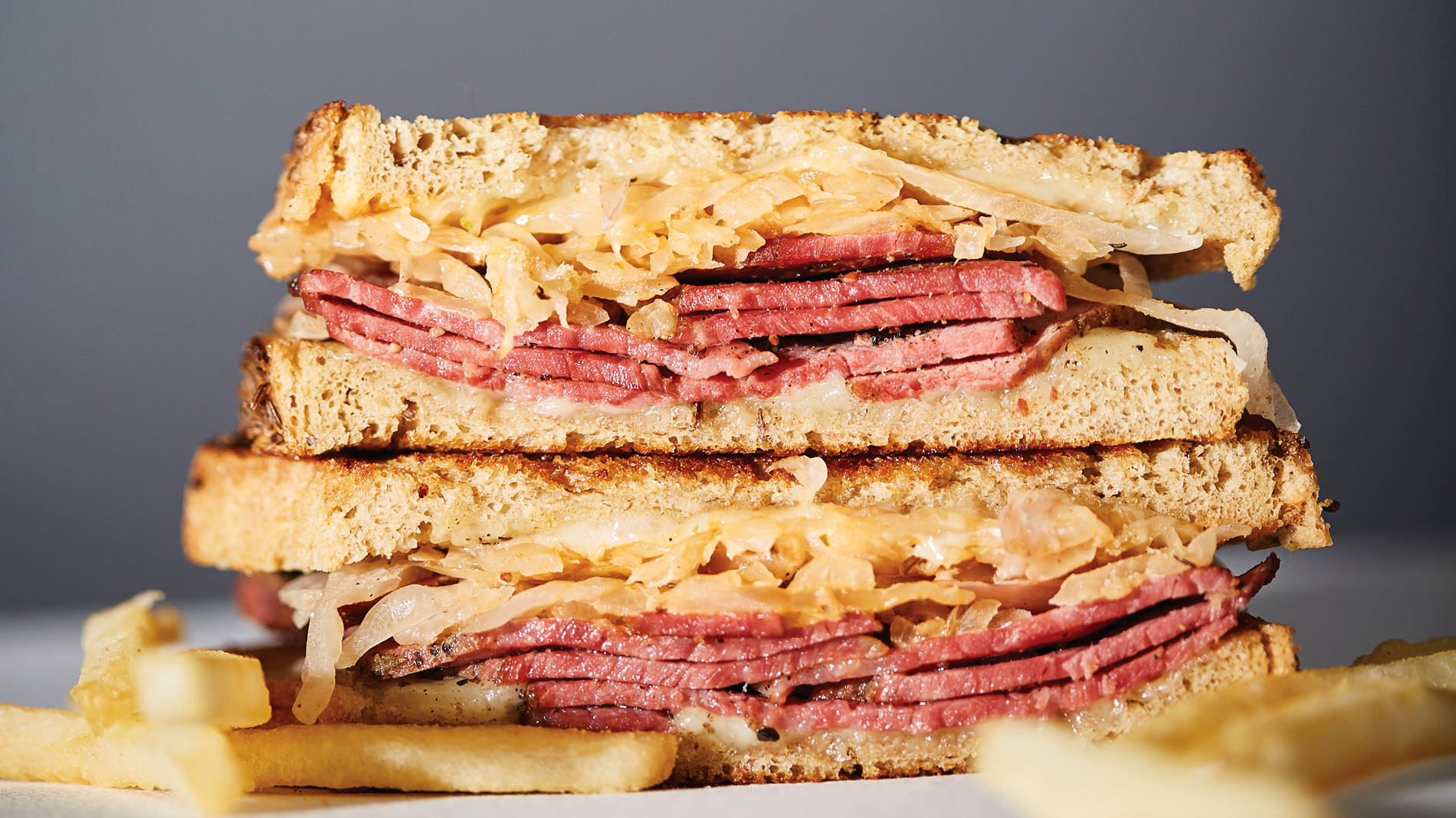 the reuben at snax gastrobar photo by izaiah johnson

“Let me guess, spelled with an x?” a friend asked when I told him I had eaten at Snax Gastrobar, which recently replaced J. McArthur’s An American Kitchen in the Lindenwood Park neighborhood. “I hope the rest of it wasn’t stuck in the ’90s,” he scoffed. What you name a restaurant is evidently a big deal.

Admittedly, I had the same reaction to the gimmicky moniker. Paring it with an equally annoying made-up word didn’t help. Just when we got used to “gastropub” (The word was added to Merriam-Webster in 2012, defined as “a pub, bar or tavern that offers meals of high quality.”), along comes “gastrobar.” If pubs (read: British) center on beer, while bars (American) are more booze-focused, then, logically, we can derive reasonable distinctions.

At Snax, the distinction is thankfully meaningless. When co-owner Arlene Maminta Browne told Sauce earlier this year that she chose the term “gastrobar” because the Snax concept meant to feature all libations with equal prominence, I nodded. OK, that makes sense. It’s why you’ll find six draft beers and nearly 30 by the bottle and can, as well as seven on-trend cocktails, such as the Rieger’s 75, a fresh, florally take on the classic French 75 featuring the Kansas City gin and apricot liqueur. The wine list is well-chosen and remarkably affordable (no glass is more than $10 and most bottles are in the $20 and $30 range), which shouldn’t be surprising since the curatorial duties are handled by certified wine specialist Stanley Browne, who co-founded Robust Wine Bar with wife Arlene. The Brownes teamed up with Robust executive chef Joseph Hemp V (who also has an ownership stake) to open Snax.

While the new menu is no rehash of J. McArthur’s contemporary bistro fare, hearty comfort food still reigns in the Watson Road building. Hemp’s “simple food done well” philosophy at Robust translated to the Snax menu, which he developed with sous chef Chris Ladley. Where J. McArthur’s used Missouri-raised wagyu beef for its plump burger, the Snax version consisted of two juicy smashed patties topped with thick-cut bacon, melted cheese (two of your choice) and the usual trimmings on the side, including crunchy house pickles. The accompanying Snax Sauce – like a jazzed-up Russian dressing – proved better than ketchup for the side of thin-cut crispy garlic-Parmesan fries.

The menu makes a point to tell us that the mashed potatoes are “Real potatoes. Real butter. Real cream.” Real comforting is what they were, whether alone or under two slabs of meatloaf made with a blend of beef and pork and doused with mushroom gravy. Sauteed green beans and glazed carrots rounded out the meat-starch-vegetable equation with vibrant color.


It would be easy to cook a chicken breast or fry a pork chop, plate it with some fries and frozen vegetables and call it comfort food. But comfort food seen through the eyes of a chef with as much experience as Hemp (Brasserie by Niche, Annie Gunn’s, Dressel’s Public House) goes beyond a perfunctory interpretation of the term – like the simple roasted chicken and smoked pork chop. There was nothing glamorous or innovative about these entrees – no fancy plating or drizzles of sauce, no precious ornament of pea shoots or eye-popping price tags – just a couple of basic dishes done well. The former – a tender, juicy airline cut, its skin seared crispy in cast iron – came with meaty shiitake mushrooms atop black-eyed peas, braised to a delicate creaminess, and doused with a lively lemon-garlic jus. The kitchen must have used cassoulet as its role model for such soul-warming appeal. Complementing the dish with an added side of buttery stone-ground grits laced with honey and chives and topped with curls of shaved Parmesan only furthered the appeal.

The pork dish – two house-cured, smoked boneless chops paired with tangy pickled red cabbage, whiskey-glazed apples and roasted fingerling potatoes – felt more fall than summer, but I could eat it season-to-season and never tire of the simple satisfaction. However, at the beginning of summer, the seasonal vegetable salad was a must. One night brought a colorful plate of heirloom squash, golden and cherry tomatoes, Marcoot mozzarella, cucumber and microgreens lightly dressed with a lemon vinaigrette which accented rather than saturated each ingredient.

But for the addition of a communal table, upgraded bar area and some color changes, the interior is essentially unaltered from its predecessor. The biggest change was the addition of a couple of televisions in the dining room. Broadcasting sporting events silently makes them less distracting and the place not feel like a sports bar. The building’s street-facing covered patio is as popular as ever, especially with the addition of a few picnic tables for larger groups, and the cozier back patio is still equally lively.

Where J. McArthur’s began as a destination for relaxed bistro dining, Snax’s starting point is serving regulars from the surrounding area with an aim toward more thoughtful food and drink than the typical neighborhood bar and grill. So, while its name may elicit a few eye rolls, Hemp et al. show you can’t always judge.

AT A GLANCE
Snax Gastrobar